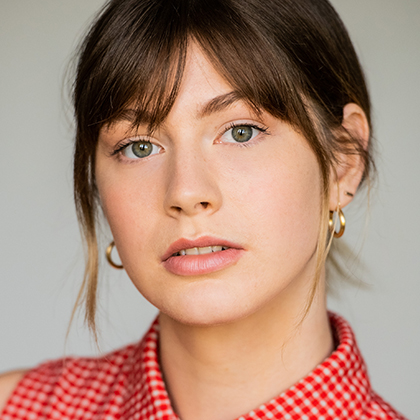 Annie Rutherford was born in London, England and raised in Toronto, Ontario. She began acting at the age of four with the Young People’s Theatre in Toronto, which sparked her desire to perform.

Throughout her youth and into her teens, Annie’s love of the stage blossomed through various improv, voice and theatre classes, including her time at the Gerald Isaac Studio and the Etobicoke School of the Arts, from which she graduated in 2018. However, it was three summers spent at the Stratford Festival’s Shakespeare School that steered her in the direction of the National Theatre School.

During her time at NTS, Annie has had the opportunity to work with incredible mentors, such as Martha Burns, Tim Welham, Quincy Armorer, Jackie Maxwell, ahdri zhina mandiela, Anita Nittoly, Marla MacLean and Graeme Somerville, among many others. She has performed in Suzan Lori-Parks’ 365 DAYS/365 PLAYS, directed by Alisa Palmer, worked with Mike Payette on Indecent, and looks forward to performing in Everybody as well as the New Words Festival in 2021.

Annie approaches her roles – and theatre in general – analytically, always considering multiple perspectives. She is very interested in expanding her theatrical knowledge and, in particular, gaining experience in directing and dramaturgy. She also loves to inspire young people – the next generation of artists.

At her core, Annie is a keen observer of human behaviour, and passionate about the impetus to make art in all its forms.