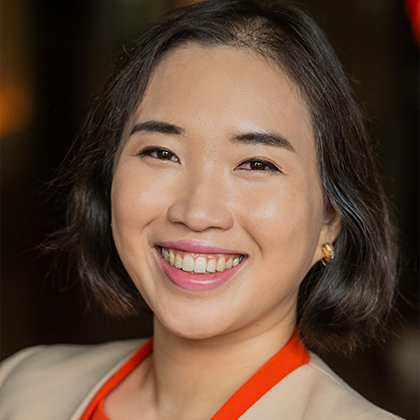 Jung A Im is a set and costume designer originally from Seoul, South Korea. She is able to see through to the essence of a play, reinterpreting its story’s inspiration from her own perspective, which she communicates to the audience through her unique artistic sense. Whenever she meets a play, she understands the story with her heart and absorbs it deeply. The audience is then introduced to the play in the form of new art through space and costumes, and it is that entire process that is most fulfilling for Jung A.

Jung A worked with directors Mike Payette and Cathia Pagotto as a set designer on Indecent, which was performed at the Ludger Duvernay Theatre, Monument-National, in December 2020. She has greatly benefitted from the knowledge she has acquired from Stéphane Longpré, Jill Thomson, Doug Paraschuk, Danièle Lévesque, Pierre-Étienne Locas, and Josée Bergeron-Proulx. The classes with directors Micheline Chevrier, Pierre-Étienne Locas, and Linda Brunelle were particularly challenging, but it was an opportunity to learn how to reinterpret a play from one’s own perspective.

In addition to her ability to design sets and costumes, she has a talent for designing props, scenic painting, and graphic design (Photoshop, Illustrator). SketchUp, 3ds MAX, and AutoCAD are also among her skillset. Before attending the National Theatre School, she had accumulated than 10 years of experience as a Visual Merchandiser at a large fashion mall in Seoul.