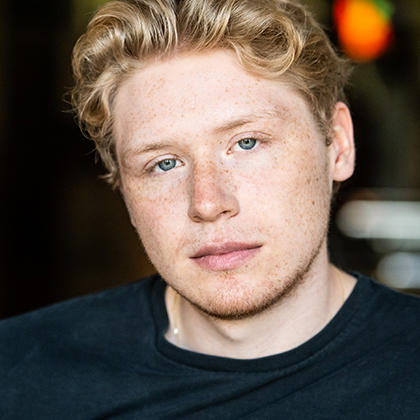 Kaeleb is a Calgary-born, Canadian actor, singer, musician and creator. He will be graduating from the National Theatre School’s Acting program in the summer of 2021. Kaeleb is looking forward to emerging into the Canadian professional arts scene and exploring the creative possibilities of theatre, film and music.

Kaeleb was first introduced to theatre and acting at a young age, performing in community theatre shows, including Jacob Two-Two meets the Hooded Fang and The Pirates of Penzance. These opportunities fuelled his passion for theatre and as a very young child he declared, “when I grow up I want to be a Jedi Knight or an actor.” So, pursuing a career in acting seemed like the right choice.

Throughout his training at NTS, he has had the opportunity to work with and learn from some exceptionally talented artists, including Alisa Palmer, Jackie Maxwell, Brenda Bazinet, Rebecca Harper, Laurel Thomson, Douglas Price, Tim Welham, JoJo Rideout, Anita Nittoly, Zach Fraser, and Mike Payette.

When not performing on stage, Kaeleb is pursuing musical studies, filmography and directing. Creating his own projects since he was a child has led him to some amazing opportunities including production work for a number of years with Media Pop Films. Recent credits include portraying the role of Tim in the 2019 Canadian satirical horror film, Red Letter Day (TANDA Productions/ Awkward Silencio), and combining his love of music and acting for television as Isaac in two episodes of the FX series, A Teacher (2020).

Kaeleb is passionate about being a contributing artist in the community, creating art, not just for art’s sake, but to promote and foster change.