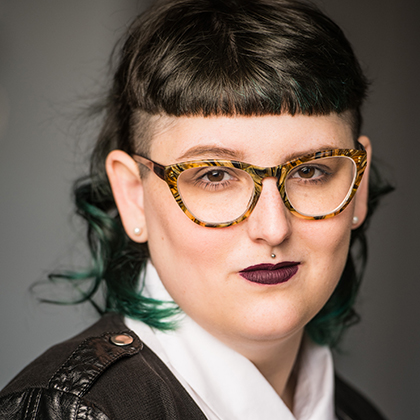 Murdoch Schon is a theatre maker, director and puppeteer. Winnipeg-born, they have been involved in the Montreal English theatre scene for almost a decade. Murdoch is fascinated by provocation, vulnerability, and the role of risk and failure in art making. Murdoch believes that theatre rises to its true power through the practices of ritual liminality, community and imagination. Murdoch is enamoured with scale, the breadth and sweep of history.  They insist on the wondrous nature of theatre as a transformative space where rulers can fail, heroes can rise and monsters seem more familiar than angels.
Mentors at NTS: Jackie Maxwell, Tanja Jacobs, Lezlie Wade, Michael Wheeler, Sarah Garton Stanley, Clea Minaker, Dean Fleming, Seana McKenna, Jean Asselin, Eda Holmes, and Rose Plotek.

Selected directing credits: it felt empty when the heart went at first but it is alright now  by Lucy Kirkwood, The Dumb Waiter by Harold Pinter, Celestial Serendipity  by Russell Wiitala, The Woods Witch  by Murdoch Schon, and  Little One  by Hannah Moscovitch.

Murdoch also has a BFA, Specialization in Theatre and Development, from Concordia University.