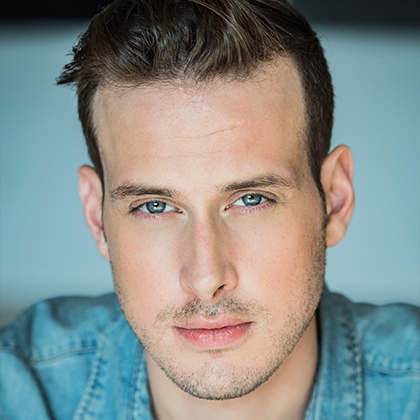 Drew Moore was born in Fredericton, NB, but raised in Ottawa. When his mother discovered that he had entirely memorized the movie Mrs. Doubtfire, she found an outlet for him in theatre. He loves that this is a job where you never stop learning or challenging yourself. He believes that comedy is one of his most important tools when it comes to storytelling and is very passionate about stage combat and playing music.

Drew, now a member of the Canadian Actors’ Equity Association, has been acting on stages in the Ottawa area for almost a decade. He has spent two seasons at the St. Lawrence Shakespeare Festival playing Hortensio in The Taming of the Shrew, Silvius in As You Like It as well as a dizzying array of characters in Twelfth Night and All’s Well That Ends Well. For the Great Canadian Theatre Company, Drew played Jake in Proud and Alex in Generous, both Michael Healey plays, and Jonny in This is War, by Hannah Moscovitch. Other favourites include Lysander in A Midsummer Night’s Dream (Company of Fools), Spike in Vanya and Sonia and Masha and Spike (Plosive), Horace in School for Wives (Plosive and Seven Thirty), and the title role in Woyzeck’s Head (Third Wall Theatre) for which Drew received two Prix Rideau Award nominations, namely for Emerging Artist and Outstanding Male Performance.

Upon graduation, Drew plans to base himself in Toronto and is excited to go wherever the work will take him next.