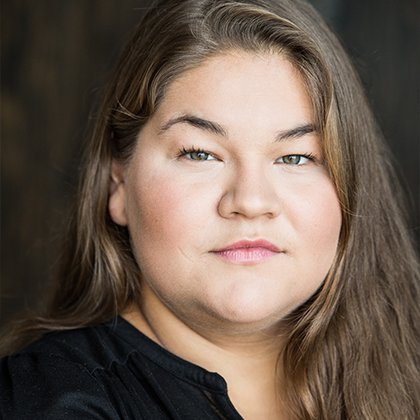 Wahsontí:io Kirby is a Kanien’kehà:ka artist belonging to the Mohawk Nation of Kahnawà:ke. She strongly believes in exploring the Indigenization and Decolonization of performance art, specifically theatre and acting. She was raised surrounded by Kanien’keha and Haudenosaunee culture and studied in Kanien’keha (Mohawk) Immersion schools throughout her childhood. She learned how to pow-wow dance, and sing using hand drums, water drums, and rattles.

During her training at NTS, she studied with such teachers as Quincy Armorer (Full Play Study), David Latham (Neutral Mask), Ian Watson (Shakespeare), and Jackie Maxwell (Chekhov), in addition to performing in productions such as Burning Vision (Mike Payette).

Outside of NTS, Wahsontí:io has worked in the Confederation Centre of the Arts Young Company, and with Red Sky Productions on Mistatim for the Prologue Showcase. She is looking forward to making her debut at the Stratford Festival this summer.

Other than acting, Wahsontí:io enjoys beadworking as well as spending time with her family and community.