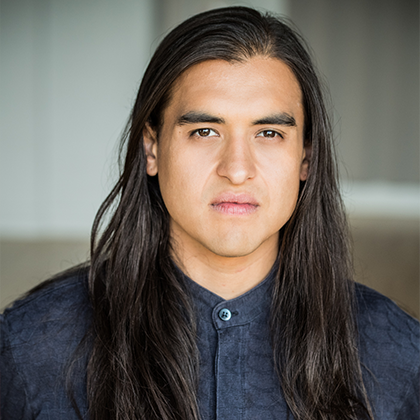 Todd Houseman is a Nehiyo (Cree) actor, improviser, and writer from Edmonton, Alberta (Amiskwaci). His work focuses on decolonization by prioritizing indigenous narratives through satire, political commentary, and traditional/contemporary storytelling. Todd hopes his presence in the arts will add to the legacy of indigenous performers in north america who have graciously paved the way for people like him.

Todd was a senior performer with Edmonton’s Rapid Fire Theatre from 2009-2017. He is the co-writer/producer/star (with Ben Gorodetsky) of Folk Lordz, which began as a touring, improvised play and has evolved into a 2-season political sketch comedy web series. Todd is also the co-creator/star (with Lady Vanessa Cardona) of the acclaimed play Whiteface, which was adapted into a short film through the Telus STORYHIVE grant in the summer of 2019. His TV credits include APTN’s Delmer and Marta and Caution May Contain Nuts. Recent theatre credits include Burning Vision, Nell Gwyn, Indra's Web (NTS/Monument-National), Or the Whale (Studio Theatre), and Metis Mutt (Fringe Theatre Adventures). He wrote the screenplay Koluhnahyzeyshuhn, and his comic Ayannisach won the School Library Journal’s Best Books 2015 award, as a part of Moonshot: The Indigenous Comic Collection.

In his free time, Todd enjoys building masks, forging knives, or being in the forests of western Alberta. He is excited to broaden his horizons and see where the road leads him next.