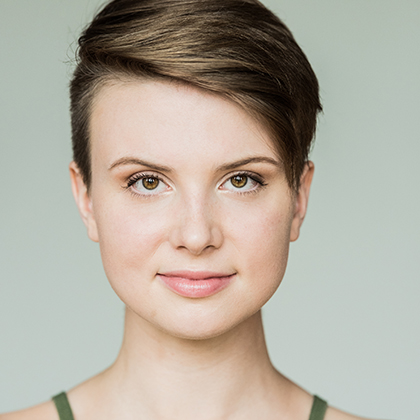 Chloe moved to Montreal from Lennoxville, Quebec, at age 17 to pursue her passion for storytelling. She studied in the Acting programs at John Abbott College and then the National Theatre School of Canada. Stories are meant to be heard, and in the interest of making theatre more accessible, Chloe has taken on such projects as Volunteer Coordinating at Repercussion Theatre’s Shakespeare in the Park, and initiating a mentoring project between NTS and The Study in Montreal.

Forever a lover of physical theatre, Chloe studied Mask with David Latham, as well as mime with Anana Rydvald. She also worked with Zach Fraser on the stage adaptation of Blindness by Jose Saramago, playing the Doctor’s Wife. While at NTS, Chloe played Victoria in Cloud 9 (directed by Alisa Palmer), a Witch in Macbeth (directed by David Latham), Chloe in We Came from Dust (directed by Maiko Yamamoto), and Charlotte and Michael in 7 Stories (directed by Philip Akin).

Outside of the theatre, Chloe can be found painting or at the yoga studio.