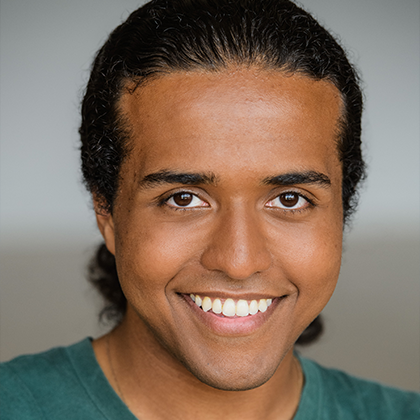 Jared Wonago is a Queer, African-Canadian actor, comedian, writer and creator from Edmonton, Alberta. He is an artist that constantly strives for playfulness, honesty and evolution in his work and his everyday life. His goal is to share his fervour, excitement and light with the world through his work in theatre, film and television.

While at NTS, Jared has had the pleasure of working with some of Canada’s top theatre professionals such as Fiona Byrne, Tim Welham, Jackie Maxwell, Ann-Marie MacDonald and Alisa Palmer.

Some roles he had the opportunity to portray include Egeus, Snug, and Mustardseed in Shakespeare’s A Midsummer’s Night Dream (dir. Danielle Irvine) and The Young Man, The Fire Eater and the Chorus in Susan-Lori Parks’ Venus (dir. Mike Payette).

Jared is a professional improv comedian who has been training and performing across North America for the past seven years. Along with performing live comedy, Jared has also had success with his online comedy. With over 116K followers, Jared has had a solid run as an online influencer on Vine from 2014 to 2016. One of his personal highlights from his presence on the social media app was being commissioned, along with a small group of other content creators, by Vine to create content for the 88th Academy Awards in 2016.

With an open heart and an open mind, Jared is eager and delighted to be taking this next step in his journey as a performer and as a human.