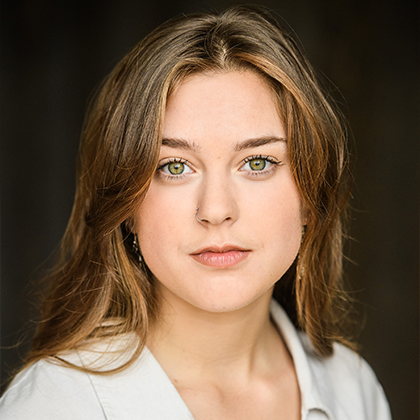 Enya Watson is a Canadian theatre artist born and raised in Smithers, on the northwest coast of British Columbia, on the unceded traditional territory of the Wet’suwet’en First Nation.

Her love for the art form eventually brought her to the National Theatre School of Canada. During her time at NTS she has trained under the mentorship of some of Canada’s top theatre practitioners, such as Tim Welham, Jackie Maxwell, Jani Lauzon, Danielle Irvine, Laurel Thompson, Rebecca Harper, Jonathan Patterson, Anita Nittoly, Ann-Marie Macdonald and Alisa Palmer. It is at NTS that she portrayed the role of The Bride-to-be in the production of Venus by Susan-Lori Parks (dir. Mike Payette) and Fräulein Kost in Cabaret (dir. Matjash Mrozewski). Upcoming credits after graduation include Wendy in Peter Pan: The British Musical (dir. Joan Mansfield) and Linda in Evil Dead (dir. Zac Mansfield).

Enya is a singer-songwriter and has worked outside of NTS as a dancer, choreographer and teacher. She has had the opportunity to work with Grammy award-winning artist Alex Cuba and facilitated Radio Theatre with CICK Community Radio.