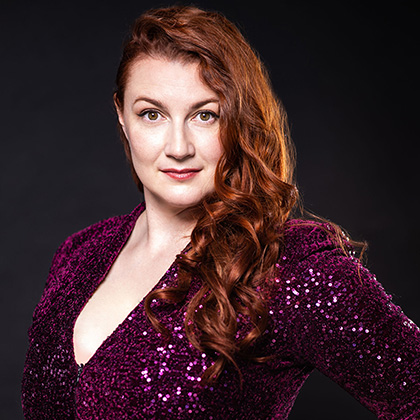 Alaina Viau is a daring director, creator and producer based in Toronto. She is the founder and Executive Artistic Director of the award-nominated opera company Loose Tea Music Theatre where they create genre defying productions that center on critical social issues, raising underrepresented voices and cross-cultural relationships. They are defined by seeking to push and challenge the opera experience: “The stunning originality of Viau’s vision…grips the imagination.” – Opera Going Toronto. Alaina is a queer disabled artist seeking a new framework for safe and compassionate creation processes that dismantle hierarchical practices. She was in residence at the National Theatre School of Canada in 2022 and was a finalist for Crow’s Theatre national RBC Rising Star Emerging Directors Prize, where she was described as someone who “will make a strong impact on the performing arts in Canada.”

During the 21-22 season, Alaina directed the fall and winter operas at Sir Wilfrid Laurier University focusing on responsible presentation of traditional operas and contemporary Canadian opera performance. Alaina is the co-creator of a non-binary opera based on the story of genderfluid and trailblazing pirates Anne Bonny and Mary Read and Zuleykha, a new opera by Afarin Mansouri. She is directing The Musical Stage Co’s One Song Glory, and a film adaptation of Emily the Way You Are, an opera about artist Emily Carr by Jana Skarecky.

The 19-20 season saw Alaina nominated for the DORA for Outstanding New Opera for Singing Only Softly, which is based on the redacted and missing pages of Anne Frank’s diary. With Loose Tea Music Theatre, Alaina launched the BIPOC Composer Librettist Development Program to support new emerging opera creators and lead the production of new works by diverse creators. Her first film short was an official selection at the USA Film Festival Dallas.

As the Resident Director at the Toronto City Opera for the 18-19 season, Alaina directed Le nozze di Figaro and La traviata, and as Artistic Director of the Ottawa indie company SOPAC for two seasons, she directed Suor Angelica, Il Pagliacci and Cendrillon. They directed L’Histoire du Soldat for the Toronto Summer Music Festival, presented a sold-out original work Whose Opera is it Anyway? at Music and Beyond Festival and directed Thirteen Strings Chamber Orchestra’s 40th Anniversary show with L’isola disabitata. They have a background in arts administration, producing and production having previously been the Assistant Production Manager at the Toronto Symphony Orchestra and the Opera and Orchestra Manager at the Royal Conservatory of Music.