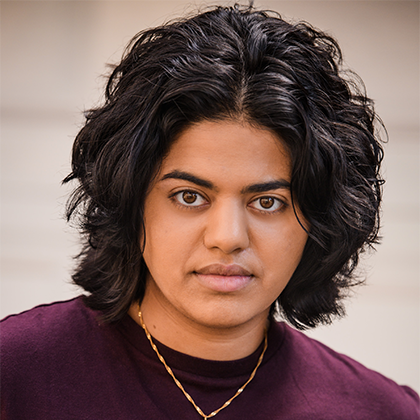 Anaka Sandhu is a South Asian and gender non-conforming artist born and raised on Treaty One Territory (also known as Winnipeg, Manitoba). As someone who has a deep love for human connection and a fascination with everyday life, Anaka has always been attracted to the shared experience that comes with theatre and performance. Shifting a perspective, mirroring someone else’s complex feelings and providing catharsis through laughter all move Anaka to their core.

Before their time at NTS, Anaka studied political science and film at the University of Manitoba. This field of study in conjunction with Anaka’s lived experience often brings advocacy to the forefront of their work and makes current global contextualization essential to their artistic practice. Along with acting, Anaka has experience with screenwriting, directing and stage management at various companies in Winnipeg.

During their time at NTS, Anaka has gained invaluable experience working with and being mentored by Canadian theatre makers such as Mike Payette, Jackie Maxwell, Jani Lauzon and Alisa Palmer. Some of Anaka’s favourite credits include portraying Mr. President in An Irresistible Urge to do Something Inadvisable (written by the acting cohort of 2022 under the direction of Jani Lauzon), and Herr Schultz in Kander and Ebb’s Cabaret (directed by Matjash Mrozewski). In addition, Anaka has been involved in several student groups at NTS, including the IBPoC Artist Student Coalition, and served as the President of the Student Association for 2 years.

As a genderfluid IBPoC artist, Anaka seeks to create space for stories that have historically been erased. They’re especially interested in challenging the notion of Western “classics,” examining stories that were not written with people like them in mind and reimagining said classics in a manner that reflects our ever-evolving world.