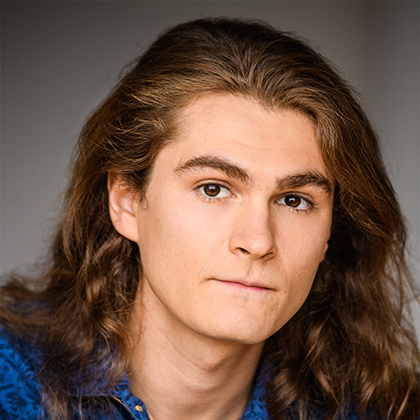 Blake Pyne is a Canadian actor, singer, and dancer born and raised in Cultus Lake, British Columbia. Blake strongly believes in the joyous power of storytelling and looks forward to a career of expanding the scope of the Canadian stories we present onstage so that Canadian theatre becomes more representative of the people that live here.

It is at the National Theatre School that he played The Baron Docteur in Mike Payette's production of Venus by Suzan-Lori Parks. He also had the pleasure of playing Lysander in Danielle Irvine’s production of Shakespeare’s A Midsummer Night’s Dream where he “took on the challenges of multiple roles with diligence, creativity, specificity, and generosity.” Blake will be continuing his Shakespeare work with Danielle this summer as Caliban in Perchance Theatre’s production of The Tempest in Cupids, Newfoundland.

Blake has also trained at the Randolph College for the Performing Arts where he worked with Ausar Stewart, Alix Sedaris, Adam White, Elizabeth and Cliff Saunders, Jeannie Wyse and Eliza-Jane Scott, to name a few. It was here that he Received the Dave Thompson Memorial Musicianship Award for his growth in music.