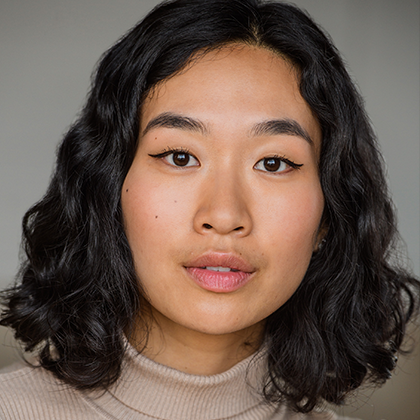 Heeyun Park 박희윤 is an actor, operatically-trained singer, and creator born in South Korea who immigrated to Edmonton at a young age. She is passionate about stories that allow her to discover more about the world in which she lives and is inspired by vulnerability and intimacy in any artistic form. She gets excited about new works and anything she can sing in.

At NTS, she worked with inspiring theatre practitioners who have instilled techniques that give her random bursts of epiphanies. Some of them are Jani Lauzon, Jackie Maxwell, Brenda Bazinet, Tim Welham, Anita Nittoly and Jessica B. Hill. During her training, she played roles such as Sally Bowles in Cabaret (dir. Matjash Mrozewski) and Demetrius in A Midsummer Night’s Dream (dir. Danielle Irvine). Throughout those years, she also had the honour of workshopping several new works by Montreal-based playwrights, where she was able to embody complex Asian characters.

Prior to NTS, Heeyun completed a Bachelor of Music in Voice Performance from the University of Alberta, where she studied with John Tessier. At that time, she also trained as a hip hop dancer, and was a part of the Young Acting Company at the Citadel Theatre, under Mieko Ouchi’s direction. During her last year of University, she played some of her favourite roles: Clara in The Light in the Piazza, Rosaline in After Juliet, and Pamina in Die Zauberflöte.