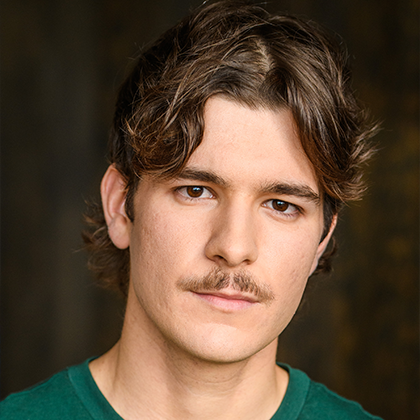 Brandon Lee Carabin is an actor, vocalist and musician hailing from the small town of Dominion, on Cape Breton Island, Nova Scotia. His first venture into theatre was a high school production of Grease, where he played Danny Zuko. He credits this experience for changing the course of his life forever.

Before coming to the National Theatre School of Canada, Brandon worked professionally at theatres across Nova Scotia, performing in shows such as Next to Normal (Gabe), The Wizard of Oz (Scarecrow) and in the first ever Cape Breton production of The Glace Bay Miners Museum (Ian). He then moved to Newfoundland and Labrador where he studied theatre at Memorial University in the Bachelor of Fine Arts program, most notably performing as Willy Carson in Edward Bond’s The Sea. At this time, Brandon also received the Maxim Mazumdar Award for the Most Promising First-Year Theatre Student.

Brandon went on to work at Theatre Newfoundland Labrador, performing in their repertory Gros Morne Theatre Festival for two seasons. Brandon has been lucky to work on the East Coast with such artists as Jerry Etienne, Ron Jenkins, Wesley J. Colford, Jeff Pitcher and Alex Fallis.

At NTS, Brandon has had the opportunity to work with many brilliant artists including Jackie Maxwell, Brenda Bazinet, Jani Lauzon, Danielle Irvine, Mike Payette, Tim Welham, Marla McLean, and Floydd Ricketts. Some notable roles while at the National Theatre School include Bottom in Shakespeare’s A Midsummer Night’s Dream (dir. Danielle Irvine), as well as the role of the Emcee in the school’s production of Cabaret (dir. Matjash Mrozewski).

Beyond acting, Brandon is an avid guitarist who enjoys songwriting and is passionate about mental health advocacy. Having gone through his own struggles, he understands the importance of mental health awareness and eradicating the stigma surrounding mental health in both everyday life and the performing arts industry.