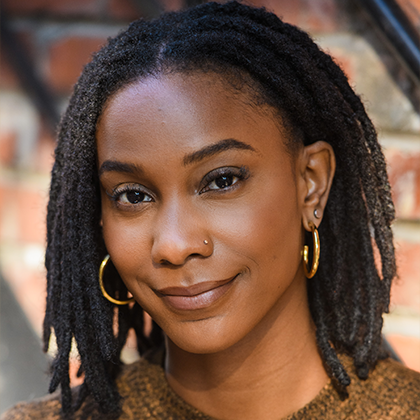 Reena Jolly is a Caribbean-Canadian actor and creator born and raised in Winnipeg, Manitoba. Reena challenges the world around her by celebrating who she is and her culture: both on stage and in front of the camera.

Before moving to Montreal, Reena worked professionally within the Winnipeg theatre community. She was blessed to work with many inspiring artists, such as Cherissa Richards, Rodrigo Beilfuss, Pablo Felices-Luna, Ann Hodges, and Hope McIntyre.

In her time at the National Theatre School of Canada, Reena has worked with an abundance of wonderful mentors. Artists including Jessica B Hill, Andre Sills, Jonathan Patterson, Jani Lauzon, Danielle Irvine, Tim Welham, Fiona Byrne, Brian Dooley, Brenda Bazinet, Mike Payette, Anita Nittoly & Floydd Ricketts, have been instrumental in her growth as an artist and performer.

Reena had the privilege of bringing the roles of Hippolyta and Titania to life in Shakespeare’s A Midsummer Night’s Dream, and embodied the role of The Girl later, The Venus Hottentott in Venus by Suzan Lori-Parks.

Reena has always had a love of working with youth. Whether the setting is theatrical or educational, she is always eager to work with young people. Reena was honoured to be selected for NTS' Youth Facilitation Workshop, a new, on-line initiative that fosters open, rigorous, safe and nurturing conversation between NTS students and the youth of NTS DramaFest. Reena’s mentorship has continued beyond the timeframe of this programme, still making herself available to her students on a weekly basis.

Reena's heart calls to art that confronts and challenges racism. She aims to defy the status quo and demands that Canadian theatre does more to normalize and cultivate diverse and inclusive theatre. It’s time. Ultimately, Reena hopes to be an example to black youth all over the world who don't see themselves often represented in film or on stage.