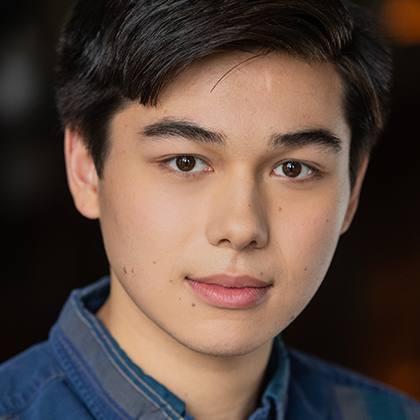 Justin Eddy is an Asian-Canadian, multidisciplinary theatre artist who specializes in acting, singing, dance, and creation. Hailing from London, ON, Justin has grown up onstage, appearing in six seasons at the Grand Theatre. There he worked with renowned directors Dennis Garnhum, Susan Ferley, and Jan Alexandra Smith, and appeared in productions including A Christmas Carol (Peter Cratchit/Young Scrooge), Evita (Magaldi), and Les Misérables (Marius). Additionally, Justin is the founder and artistic director of the Doorstep Theatre Project.

In his time at the National Theatre School of Canada, Justin has worked with incredible mentors. Artists including Jackie Maxwell, Brenda Bazinet, ahdri zhina mandiela, Anita Nittoly, Danielle Irvine, and Martha Burns have been instrumental in his growth as a theatre practitioner. Outside of NTS,Justin has worked with Natalie Weiss, Tom Oliver, and Blythe Wilson to continue his classical vocal training and specialization as a musical theatre performer. He has also had the honour of collaborating with the Brott Music Festival (Hamilton, ON), the Canadian Musical Theatre Writers Collective (Montreal, QC), and Centaur Theatre (Montreal, QC).

At the core of Justin’s work is a drive for equitable representation, accessibility, and vulnerability in creation. To him, live theatre is an imaginative outlet that can provide a space for creators and audiences alike to feel heard and recognized. Upon graduation, Justin is looking forward to collaborating with a myriad of artists across the country to take risks and uncover discoveries together.