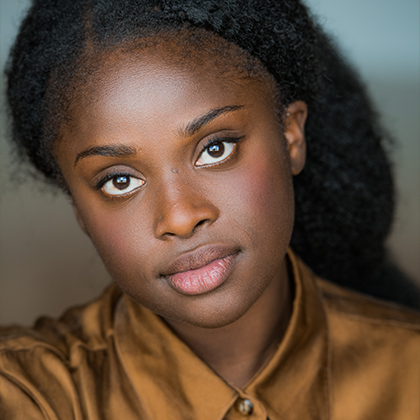 Born in Munich Germany and raised in Nelson BC in the magnificent mountains of the West Kootenay Region, Espoir is an Afro-Canadian actor, storyteller, and performer of music across many mediums.

Espoir seeks to stretch the perimetres of her definition of theatre daily. Community, ensemble, and chaos are her guiding principles. Espoir works to awaken synesthesia. She believes that when she dares to accept herself, her heritage, and work for inclusion of others, what is produced will always be more grounded and true, holding the potential to change the performer/audience relationship, and the dimensions of storytelling. She believes this work is the artist’s ultimate act of peaceful decolonization and the proper thing to do, but more simply, its where Canadian theatre will transcend into new forms.

During her training at NTS, Espoir has worked with an abundance of artists such as Ian Watson, David Latham, Jackie Maxwell, Graeme Sommerville, Adam Lazarus, Quincy Armorer and Alisa Palmer. In 2019 at NTS, she performed in Love and Information, Romeo and Juliet, and Burning Vision- directed by Mike Payette. She also had the opportunity to explore outside traditional theatre training setting during her summer of 2019 performing in the Fringe show TOMORROW; a fever-dream mash-up of Macbeth, dealing with our current climate crisis.

While Espoir is a classically trained singer, her true musical aspiration is arranging music for many voices. She has also trained in unarmed combat, rapier and dagger, and case of rapiers. Her dialect training includes RP, Upper RP, Cockney, Scottish, Deep South (USA), and West African. She is an Alto, 5’4”, brown eyed, and brown haired. She is a black woman. Her pronouns are she and her. You can call her Espoir, Akossiwa, or Zozo.

“You cannot, you cannot use someone else's fire. You can only use your own. And in order to do that, you must first be willing to believe that you have it. You need to reach down and touch the thing that’s boiling inside of you and make it somehow useful.” - Audre Lorde