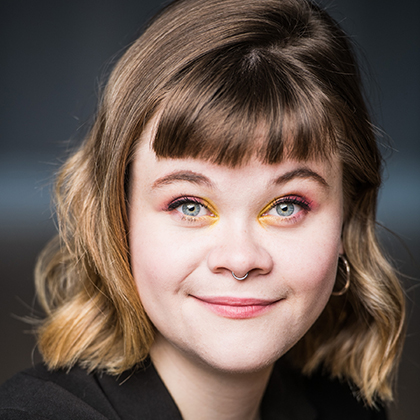 Angelica Schwartz is a queer, interdisciplinary artist working with performance, text, and technology. Born as a settler on Treaty 1 Territory (Winnipeg, MB), Schwartz works as a director and collective creator. Their process is informed by devised, physical, Pochinko clown, and post-dramatic theatre. Schwartz is invested in exploring artistic creation as an act of resistance in the age of instant instagram fame, casual colonial Can-150 fireworks shows, and accelerated climate change – a resistance to the ways in which we view identity, queerness, bodies, and investigating how we can create authentic human connection in our highly digitized era. While at school, they directed  GAME, The Dragonfly of Chicoutimi and Miss Julie. Schwartz worked alongside Jackie Maxwell, Eda Holmes, Sarah Garton Stanley, Anita Rochon, Michael Wheeler, Julie Fox, Naomi Campbell, and among others. Schwartz is a Technical Production graduate of Studio 58 in Vancouver, BC, and the founder of Happy/Accidents in Winnipeg.