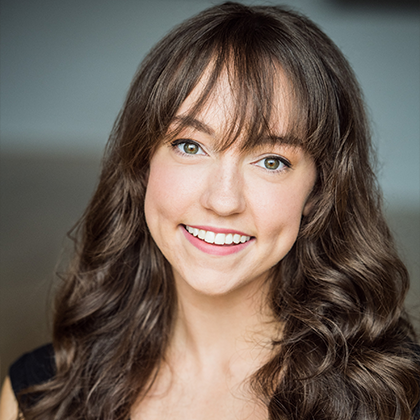 Erin Loretta Mackey is a triple threat performer and creator hailing from North River, Newfoundland. Her work ranges from contemporary to Canadian to Shakespearean and beyond.

Coming from the East Coast, one of Erin’s missions is to share her culture with the rest of the country and the world. Her Newfoundland roots run deep and have shaped her into the artist she is today. Whether it was singing to her parents’ dinner party guests at the age of 3, or performing Swan Lake in her living room while wearing a bathing suit at the age of 5, she has always loved to entertain.

Erin has a great aptitude for classical text having spent six seasons working at Perchance Theatre, Newfoundland’s only professional classical theatre company. It is there that she portrayed a plethora of roles such as Nina in The Seagull, Helena in A Midsummer Night’s Dream, Clarice in The Servant of Two Masters, and Juliet in Romeo and Juliet, while working with some of Canada’s most renowned directors, including Perry Schneiderman, Thomas Moschopolous, Danielle Irvine, and Jeannette Lambermont-Morey. In addition to classical works, Erin has a strong love for musical theatre, having performed in productions such as Next to Normal, Jesus Christ Superstar, Billy Elliot, The Sound of Music, Nunsense, in addition to several others.

During her time at NTS, Erin has had the opportunity to study various styles of theatre, and the pleasure of working with artists, such as Alisa Palmer, Jackie Maxwell, David Latham, Ian Watson, Krista Jackson, Fiona Byrne, Graeme Somerville, Deborah Hay, and Mike Payette, to name a few. Erin has recently been cast as the title character in Jessica Swale’s Nell Gwynn, performed from February 25th - 29th at the Monument-National in Montreal.

Upon graduation, Erin is ready for whatever challenges the artistic world has to throw at her!