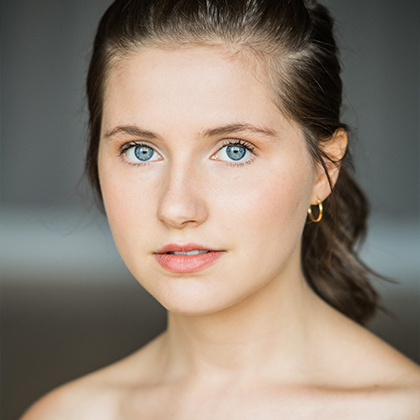 Brontae Hunter is an actor and songwriter, born and raised in Kincardine, Ontario. She is passionate about high-energy, messy, and romantic storytelling — onstage, in front of the camera, and in song.

In 2017, she began her training as an actor at The National Theatre School, where she had the opportunity to study Shakespearean text with Ian Watson, mask work with David Latham and Rebecca Harper, Chekhov with Jackie Maxwell, and Shaw with Graeme Somerville and Deborah Hay. She had the pleasure of playing Lady Capulet in Romeo and Juliet, directed by Danielle Irvine, and Captain Mike in Burning Vision, directed by Mike Payette.

As a musician, she has toured through several venues across Ontario, returning many times as a featured artist to the incomparable Summerfolk Music Festival in Owen Sound. In the summer of 2018, she created a one-woman play, Even in the Dead of Night, in collaboration with visual artist Bronwyn Garden Smith, which premiered at The York Lane Art Collective in Stratford. Select theatre credits include Sarah in Innocence Lost and Fantine in Les Misérables, directed by Veronica Davidson.

She has a deep appreciation for mentorship as well as artists of the past, present and future. She is inspired by the magic of something ordinary, a passionate argument, or any body of water.