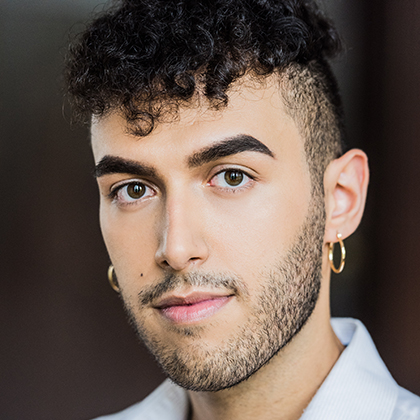 Christos Darlasis prides himself on his intuitive approach to artistic and conceptual design. His affinity to the arts and theatre hails from his Greek roots and the spiritual and historical ties it has with his culture. He values the aesthetic and visual power of storytelling, and instinctively taps into the essence of a project to better aid and heighten the experience of the spectators as well as his collaborators.

His work has adorned many projects, whether in theatre, fashion, photography or short films, and he has also worked in a few shops as a stitcher and prop maker. Roles filled include Head or Assistant Makeup Artist, Scenic Painter and Costume Designer.

To this day, Christos also takes to the stages of queer nightlife venues across Canada, with drag performances for either entertainment or fundraising, as well as political performance art and activism, which is a huge part of his artistic drive and theatrical work.

While at school, he has collaborated with directors Maiko Yamamoto, Philip Akin and Lezlie Wade, among others, and has worked and trained under the guidance of set and costume designers such as Francois St-Aubin, Stephane Longpre, Douglas Paraschuk and Lauren Acheson.